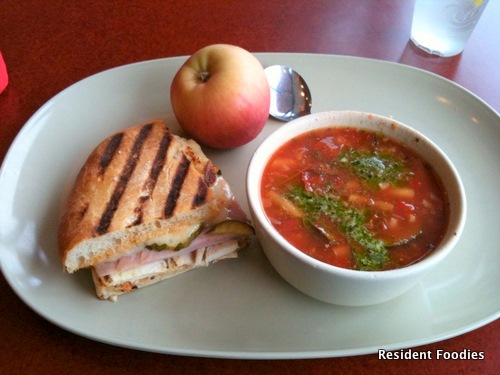 Loved the toasted focacia bread–nice and crispy. Not exactly authentic, but for a mainstream U.S. chain, this Cuban chicken sandwich is very respectable. 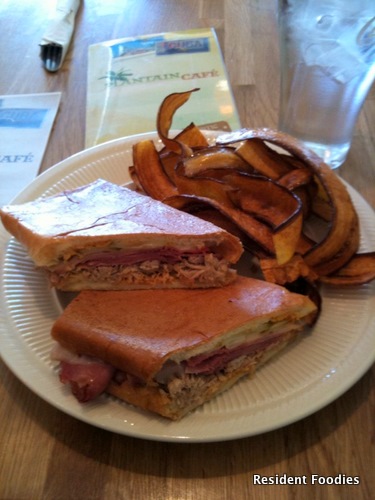 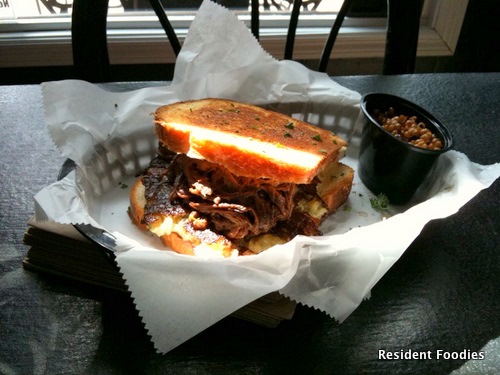 Throwdown: Tonight’s episode pits Bobby Flay against Omar Giner of La Isla Restaurant in a stuffed French toast throwdown. Food Network writes: “Omar Giner, the chef and owner of La Isla Restaurant has been bringing a taste of Cuba to Hoboken, New Jersey since 1996. Omar thinks he is part of a special called “Brunch: Over The Top” featuring some of the best brunch spots across the United States. What he does not know is Chef Flay is getting ready to cross the Hudson with his own extraordinary version French Toast and he is ready to stuff the competition!”

Winner: Omar won, but it was surprisingly close! Bobby almost pulled off the upset. Bobby falls to 4-8 for the season.

Throwdown: In this week’s episode, Bobby Flay challenged Nick Vazquez to a cuban sandwich throwdown. Born in Cuba, Vazquez has a Cuban restaurant Azucar (“something sweet and delicious”) in Jersey City, NJ.

Food Network describes the challenge: “Cuban born chef Nick Vazquez came to America in the 1960’s. And luckily for the New Jersey food-loving locals, he never abandoned his Cuban roots. His popular restaurant Azucar serves up delicious Cuban classics like ropa vieja and vaca fritta. But, it is his Cubano Grande sandwich that has customers doing the Rumba.”

Dishes: Nick made a classic Cubano sandwich, with Cuban bread pressed flat and crispy on the outside. Nick seasoned his pork shoulder with a rub consisting of garlic, oregano, cumin (a necessary spice for Cuban cooking giving it an earthy texture and aroma), and sour oranges. The pork marinates for an entire day. Afterwards, Nick covered the pork in salt, which keeps the moisture in the pork while cooking it for 5 to 6 hours at 350 degrees. The salt peels off in a layer when done. Nick used layers of Virginia ham and park, with thin slices of long Kosher pickles and mayonnaise for his dressing. The sandwich was then pressed in a sandwich press (plancha) until the cheese melts. Yum!

Bobby’s cuban sandwich had pulled pork in it, a departure from the traditional ingredients. Bobby also used Swiss cheese, ham, and homemade pickles. Instead of sour oranges, Bobby used regular orange juice and lime juice to marinate the pork shoulder, which was seasoned with salt, pepper, and cumin. After searing the pork, Bobby also added chicken stock, onion, fresh oregano, whole garlic cloves, bay leaves, and the sour oranges mixture. Miriam made fresh pickles–adding sugar, salt, mustard, dill, coriander seed, garlic, and some jalapeno to white vinegar while heating it to dissolve it, and then pouring it onto sliced cucumbers. The pickles need between 4 to 48 hours. For his dressing, Bobby used mustard, mayonnaise, and roasted garlic (a Bobby twist).

Winner: Nick Vazquez! But it was a closer decision than expected. The judges loved both sandwiches. Nick especially loved the crispiness of both breads–as tested by his tapping on the top of each breads to make a “sexy tang.” While enjoying Nick’s traditional sandwich, Olga also loved the pulled pork in Bobby’s, which gave it a modern, gourmet taste.

Throwdown: Today’s episode is a repeat from Season 1 (boy, there sure are a lot of repeats this year!). Bobby challenges Lynn Winter of Lynn’s Paradise Cafe in Louisville, Kentucky to a breakfast throwdown. Lynn wins!

Here’s a video of Lynn’s Paradise Cafe from YouTube:

Here are the recipes: