Recap: Our favorite Chef Dominique Crenn was eliminated last night in the tamarind challenge, after being in the bottom two for the past several weeks. That leaves Chef Amanda Freitag as the only woman chef remaining. 5 men remain! The gender disparity gets worse! In 4 weeks, 2 of the 3 women have been eliminated on the Next Iron Chef. And, as you may know, Cat Cora is the only female Iron Chef (with 4 males).

Our new favorite is Chef Amanda Freitag. She will be the Next Iron Chef. We hope.

This week’s challenge involved the chefs visiting an Asian restaurant and studying one of its signature dishes. Afterwards, each chef was asked to prepare a dish with some of the same Asian influence but then transforming it into an American dish.

Chef Brad Farmerie got the boot this week. Our pick Chef Dominique Crenn was again in the bottom 2, but managed to survive (thank heavens)! Chef Seamus Mullen won the challenge. We were a little bit surprised that Chef Jehangir Mehta–who prepared an outlandish shake with “take out” containers–was not in the bottom 3. The dishes did not look like dishes, but a collection of containers. Then again, we don’t get to taste the samples on TV. So maybe it tasted better than it looked.

OK, we have to admit: we were nervous. Really nervous. Our pick to win the Next Iron Chef–Chef Dominique Crenn–almost got eliminated on the very first show! She had to cook 2 dishes with sea cucumber, an ingredient she apparently had not ever seen before. Suffice it to say, Chef Dominique had no idea how to cook sea cucumber. If you are wondering what sea cucumber is, take a look: 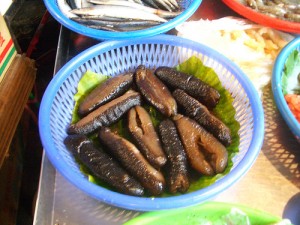 Crenn was saved, though, by Chef Eric Greenspan, who had the unenviable task of cooking 2 dishes with grasshoppers. Yes, grasshoppers! (No picture needed.)

The other 8 chefs also had pretty out-there ingredients:

The judges thought Nate Appelman’s dishes with unlaid eggs were the best. Appelman is a character, kind of like a Chuck Liddell for the kitchen. Appelman managed to insult many of the other chefs. During the first round, he told Dominique Crenn he “didn’t enjoy” her dish. He told Seamus Mullen that his salmon would have been better with acid. He also criticized Jose Garces’s chicken as too dry, even though the majority of other chefs voted it as the best first round dish.

Resident Foodies say: Dominique Crenn will be the Next Iron Chef.  We’re all in with Crenn!  She’s the chef on the top, right below. She’s French and the Executive Chef at Luce at the Intercontinental Hotel in–where else–San Francisco.