Just had this amazing brunch at Fiddlehead Cafe in Chicago (Lincoln Square) consisting of chicken and waffles, topped with Canadian bacon! I was skeptical of the idea of chicken and waffles, but now am a total convert. The combination of salt and sweet was so tasty. The texture of the waffles so light and fluffy, while the chicken was tender and juicy. Yum, yum. 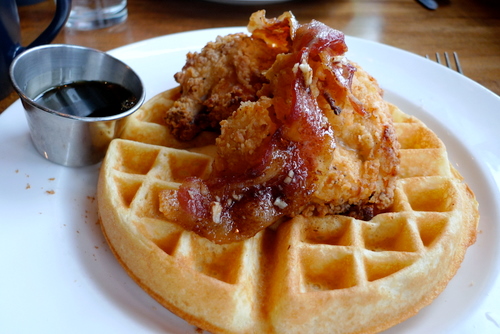 The ever present David Chang appeared on the Today Show with Matt Lauer this week. Here’s the video of David making kimchi. David’s new Momofuku cookbook hit bookstores this week.

Wow, tonight’s episode exposed how some chefs have no clue how to cook a vegetarian entree. You would think that they never cooked a vegetarian dish before! Natalie Portman, a vegetarian, was the guest judge. Mike Isabella got the boot after failing to cook his leeks correctly–they were undercooked and bitter. Natalie picked Kevin Gillespie’s kale dish as her favorite. The 2 remaining female chefs, Robin Leventhal and Jennifer Carroll, barely survived in the bottom 3 again!

Out: Mike for screwing up leeks and everything else

Wednesday is Episode 10 of Season 6 of Top Chef. Natalie Portman is the guest. TV dinners is one of the challenges. Should be interesting!